Below is a roundup of last week’s notable industry news, with summaries and our opinions included. Lots going on with Q1 earnings, newfronts, and as always, news about our friends at Google and Facebook.

Make sure to reference the U of Digital glossary when you come across an acronym or term you are unfamiliar with. Enjoy!

Summary: Below are Q1 earnings one-liners for each company.

): Ad revenue jumped significantly YoY, primarily due to user growth (surprising!) and more ad inventory from stories and news feed.
Amazon (): Revenue growth slowed down but the company is more profitable than ever.
Twitter (

): Ad revenue was up significantly, due to increased video spend and ad engagement, despite declining monthly active users.
Snap (

): Daily active users grew for the first time in awhile, reversing recent declines, and revenue was up 39% overall.
IPG (

): Revenue up 6.4% (5.7% in the US), which was attributed to increased investment in, and growth from, individual agency brands
WPP (

): Revenue down 2.8% YoY (8.5% in North America), which was attributed primarily to losing major clients like Ford, American Express, and United Airlines.

Opinion: More thumbs up than down, which is a sign of a healthy overall ad industry. It’s interesting that the two ‘down’ companies, WPP and Google (although Google wasn’t actually down, its growth rate merely slowed down more than expectations), are the biggest players in their respective categories. Which means the dollars are spreading around and challengers are stealing some market share. Unfortunately, the ‘challengers’ are also behemoths, not fresh, new, up-and-comers, so overall spend continues to consolidate up top. Amazon’s continued growth supports the idea that there is a digital advertising ‘triopoly’, not a ‘duopoly’ of just Google and Facebook.

Summary: Facebook is expecting to be fined up to $5B by the FTC, which is investigating whether FB violated its 2011 agreement to protect user privacy. FB has set aside $3B in anticipation of the fine. There is speculation that in addition to a fine, the FTC may also limit FB’s usage of data for advertising purposes. The FTC is also investigating FB’s involvement in the Cambridge Analytica scandal, among other ongoing investigations into the company’s practices across the globe.
Opinion: While in absolute terms, this is a hefty fine on the social networking giant, in relative terms, it amounts to a parking ticket for them (a $5B fine would be equivalent to less than 1% of Facebook’s market value). And when did getting a parking ticket actually make anyone pay attention to parking rules? What’s fascinating is that the company’s stock bounced up on earnings, despite this (apparently) significant setback: 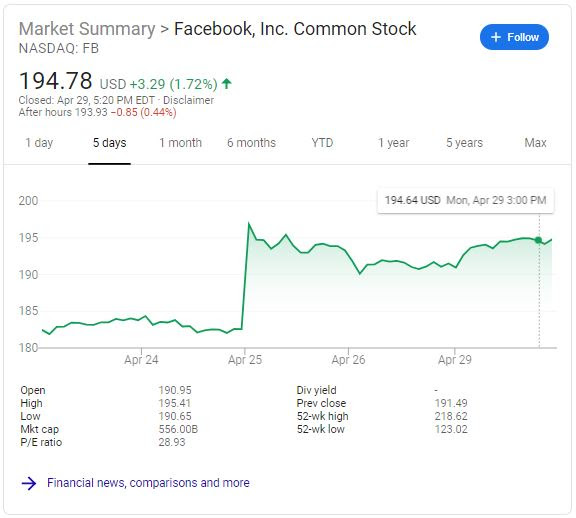 The point here is this: FB’s leadership and investors are positive on the outlook of the company because the fine will wipe their slate clean of wrongdoing (in the US, at least). And as Q1 earnings indicate, advertisers continue to grow their investment with FB (despite what they might say about the company publicly) because FB has the goods (aka user data). There hasn’t been any real financial incentive for FB to change their behavior. This fine clearly won’t change that.

Summary: There was a contentious meeting held last week between publishers and Google around some of the upcoming unified pricing changes within Google’s pub-side ad server. The two major changes that have been called out: Google is removing the a publisher’s ability to set unique floor prices for each demand source, and limiting the number of floor price ‘rules’ a publisher can create to 100. Even if that means nil to you, know this: most publishers are angry and feel that Google is stripping them of control and revenue potential. Google will be holding meetings with publishers in the upcoming weeks to explain the changes in greater detail, and to present their vision of a more efficient marketplace in the long-run.
Opinion: There is a ton of great detail in this article about Google’s changes and how they will impact the auction dynamics of the marketplace. Feel free to get in there and nerd out, if you so desire. The big picture is fairly simple: most of the publisher community feels like the changes will hurt their business and that Google is redoing the system to favor themselves and masking it as ‘better for the long-term health of the industry’. We feel as though it may be a bit of a combination. Google’s long term vision makes sense – a unified auction where everyone participates on a level playing feel should theoretically create an optimal marketplace for publishers and advertisers, as opposed to a ‘hacked’ setup with complex rules and floor prices. With that said, is there a middle ground solution that doesn’t hurt publisher revenue in the near term? Can Google be trusted to facilitate a fair auction, given its history? Google has an overwhelmingly dominant market share in the pub ad serving space today. We’ll see if this backlash puts a dent in their market share, and breathes some life into their competitive set.

Other Notable Headlines
Publishers Rejoice: VPAID Is Out And SIMID Is In
TV Still Dominates Upfront Dollars, But Digital Media Makes Inroads
Intelligent Tracking Prevention 2.2 Changes Cookie Storage Duration
IAB’s Transparency And Consent Framework Update Is In, And Hopefully Google Will Be Too
Walmart Is Finally Ready To Dip Into The Original Streaming Content Market

That’s it for this week’s newsletter. Drop us a line with any questions / feedback. Thanks for reading!